In the past year I recorded conversations with an eclectic mix of 40 designers and published them on my site under the moniker The Good, The Bad, and The Interesting (mostly in Dutch). This summer I decided to invite all my guests for the very first The Good, The Bad, and The Interesting Exclusive Design Challenge. This weekend 16 people showed up for this event. I’m probably biased, but it was fantastic. (A more detailed report of this event can be found here)

16 incredibly creative people in a rather luxurious creative space in Amsterdam working on a topic of my own choosing. I am a very lucky person.

I started the workshop with a short introduction. I explained the idea that the web is accessible by design, and I explained that inclusive design is the common way to do accessible design on the web. I also briefly explained the problem I have with inclusive design: it assumes equal knowledge of different forms of interaction, which I think is not the case (I explain this in more detail in another blogpost). I showed my guests the seven Inclusive Design Principles that the Pacielo Group published recently and I showed them what happens if you flip these around. These Exclusive Design Principles look like principles that are used for super fancy, flashy websites with a focus on novelty, branding and wow factors. Part of the goal of the Exclusive Design Challenge was to find out what would happen if we used these exclusive principles on people with a disability. 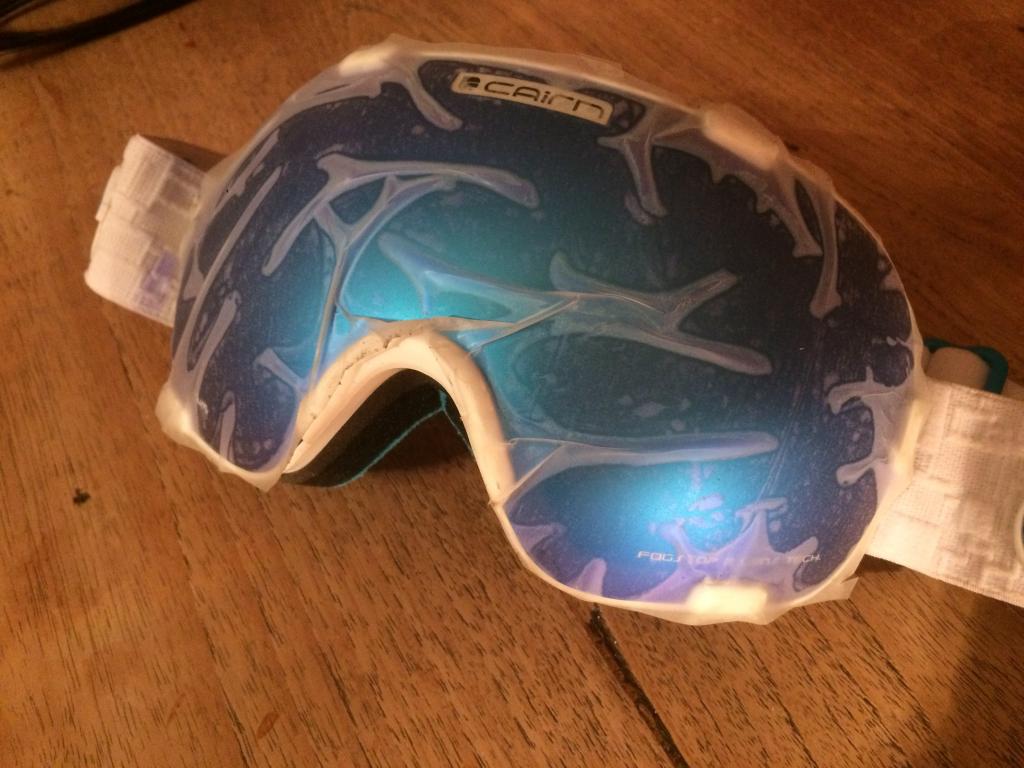 I created four teams, each with their own assignment to design something for a real person with a disability. For instance for Arnold who is deaf. These were the rules:

Larissa is a blind student of mine. This team came up with a device that would make it possible for Larissa’s guide dog to talk, like Dug, the talking dog in the movie Up. With this device the dog can answer questions about the surroundings, which is a big issue for Larissa, especially in locations she doesn’t know yet. It can describe the room, the amount of people, it can recognise people and say these things out loud. This way other people can hear it as well.
The team built a “working” prototype, where Peter van Grieken, who played Larissa, entered the room blindfolded, asked his dog where to hang his coat, asked the dog what the room looked like, and where he could find Vasilis, whom he had to meet. The dog led him upstairs, quickly counted the stairs, led him to me, and told him to give a compliment about my t‑shirt. It was a fantastic, very personal presentation and I can imagine something like this appearing in the near future with the help of cameras and image recognition APIs. I loved the personal touch. 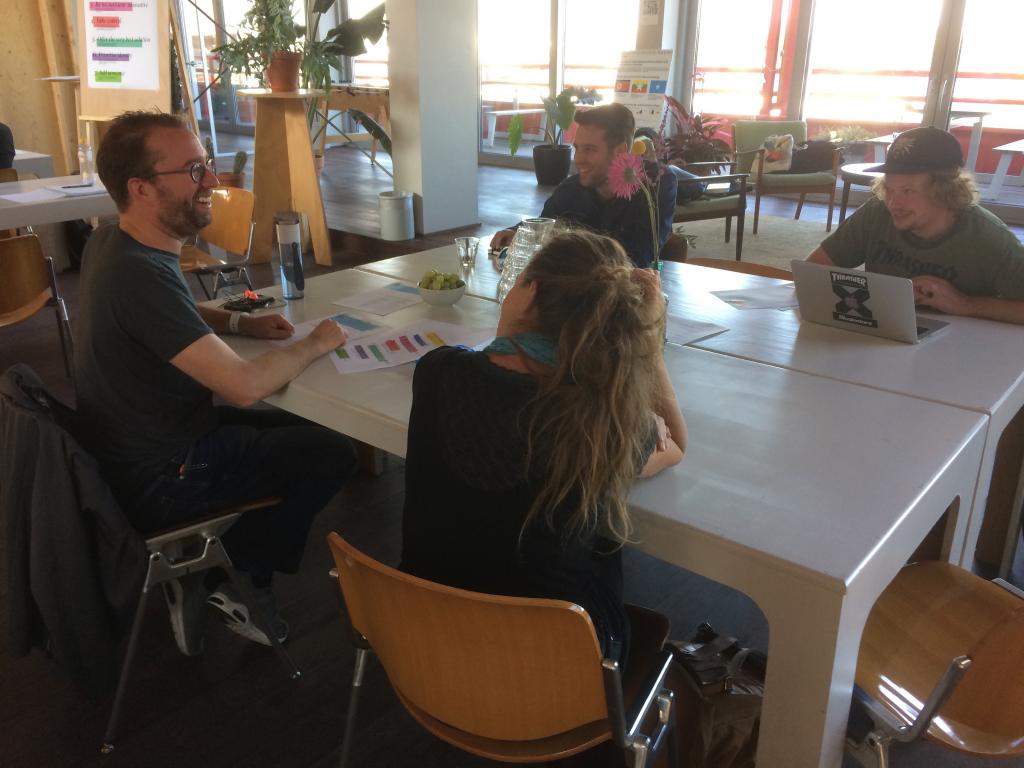 Arnold is slowly turning deaf. Without strong hearing aids it’s impossible for him to follow a conversation, and even with these aids it can be very hard, especially when the people he talks with are not right in front of him. The solution this team worked on solved a few problems at once. It was a colourful bracelet which shows that this person is hard of hearing, which can help with the issue of awareness: deafness is invisible. People can’t see that someone can’t hear you. There was a very interesting side note during the presentation where they wondered if, as a society, we find this acceptable. We can identify someone who is blind, we can identify someone in a wheelchair, but deafness is invisible. Of course, they concluded, this is up to the deaf person. That’s why they came up with the idea of a bracelet, or a clearly branded Apple Watch app, instead of a lamp on their head (to name a silly idea). This way the user can choose to identify themselves as deaf in certain situations, or not.
The device can also solve the issue with how to position oneself ideally in a group in order to hear and see the people who are talking. It was a very interesting idea, which turned out to be much more complicated than it looked like at first. 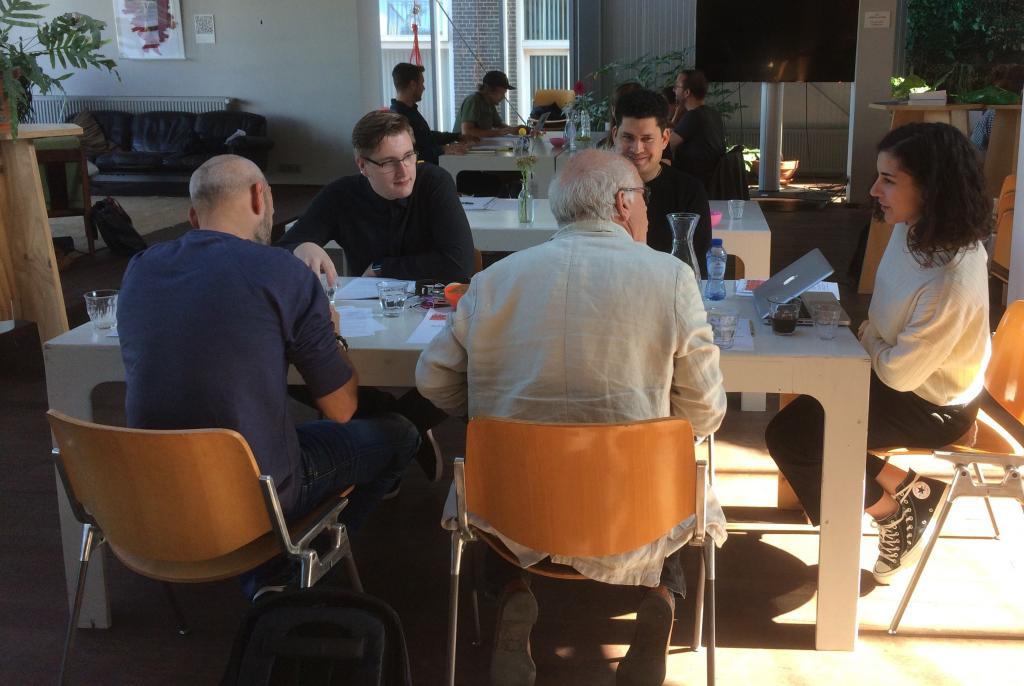 Marijn is CTO of a pretty large Dutch tech company. Marijn is severely motor disabled. He has problems with typing, with talking, with anything that needs movement really. But not with thinking, and not with moving around. He has a fantastic wheelchair.
This team took the personality principles to the next level. They combined Marijn’s musical taste, his urge for independence, and the fact that he has two kids. They came up with a modular, walking wheelchair in Spacelord style that’s extendable and can be changed for any purpose. Such a walking chair would make it possible for him to take a train without any help — which is still impossible in the Netherlands — it could open conversations with people who have questions but are afraid to ask, and it’s fun with the kids.
This exercise showed me that indeed this very personal approach added quite a lot of value. These solutions would probably not have surfaced if the assignments were for an average target audience of people in a wheelchair. 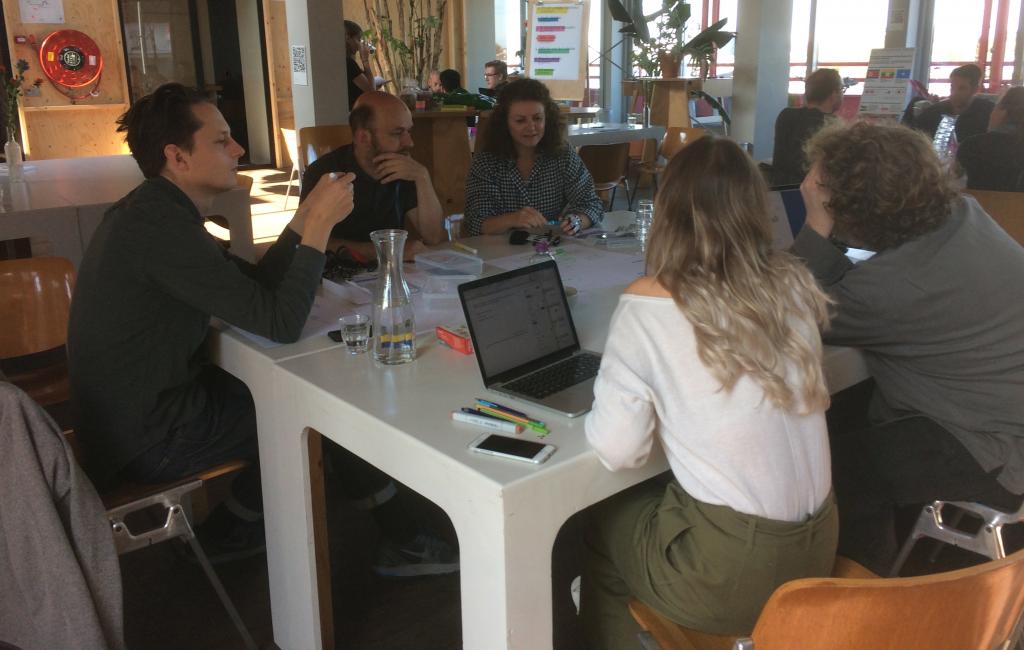 The last assignment was not really for someone with disabilities — it’s debatable if we should consider being a front-end developer a disability. This team was creating something for Hidde, a freelance front-end developer who wants to create accessible websites but works in teams that are not aware this exists. To be honest, I constructed Hidde from a few conversations I had with different people. I had conversations with a real Hidde, but also with several other developers and designers who care about accessibility, with myself, and with a product owner who works on a large website. This resulted in a list of problems these people face while trying to put accessibility onto the corporate agenda.

The big question here was how we can make accessibility as obvious as something like sustainability. Both not clearly profitable, yet sustainability did succeed to get high on the corporate agenda. What can we do to achieve the same thing with accessibility?

This team came up with a long list of things that can be done. The first thing they came up with was the idea to start working with a so called MAP, instead of the commonly used MVP.

And then they suggested to remove the ’n’ from Hidden, and turn Hidde into a hero, change frustration into a vision, move from duct tape to scalable methods, from solo to team effort. All things many people are already doing, but it’s a good to see them combined into a list of more or less actionable things.

And on top of this they ended with the MAP manifesto, which is pretty damn good (but I forgot to take a readable picture of it, so I’ll post that manifesto later). 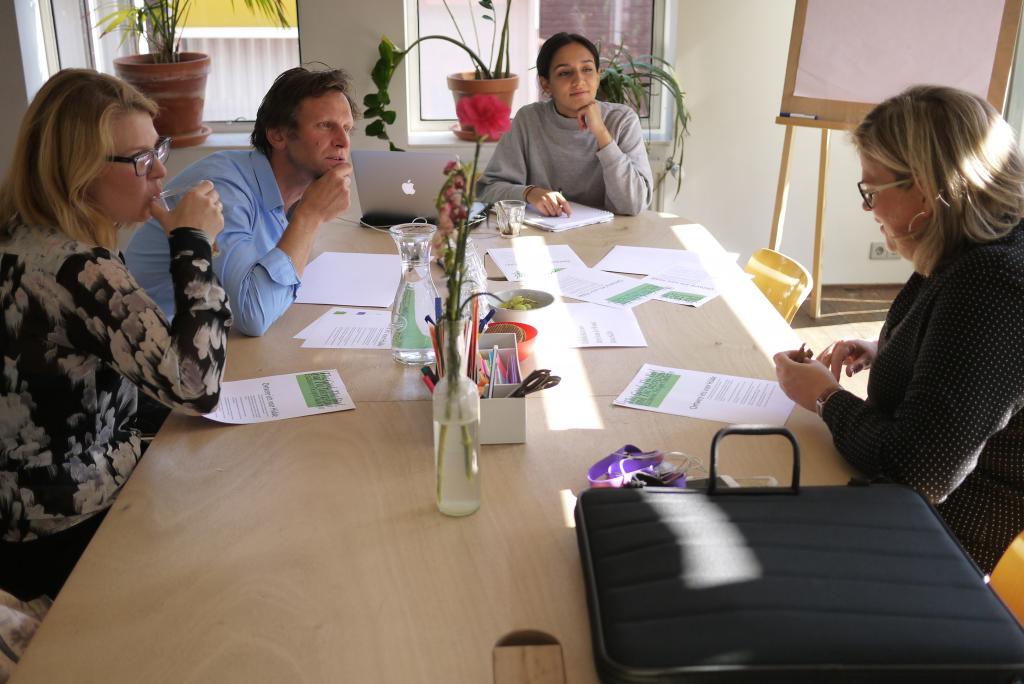 Thanks to all my guests, all the students who helped me out, and the wonderful hospitality of Spring House, it was a fantastic day. But it’s too fresh to draw any conclusions yet. The solutions may not all be directly usable, but they did show that adding personality to the mix does something interesting.

You can expect more detailed blogposts in the near future. For instance, I’m going to translate and publish the assignments. I had a wonderful team of students who documented the whole afternoon, so I’m sure I’ll end up with lots of data to analyse. I’ll keep you posted of any insights.

An extended report of the first Exclusive Design Challenge